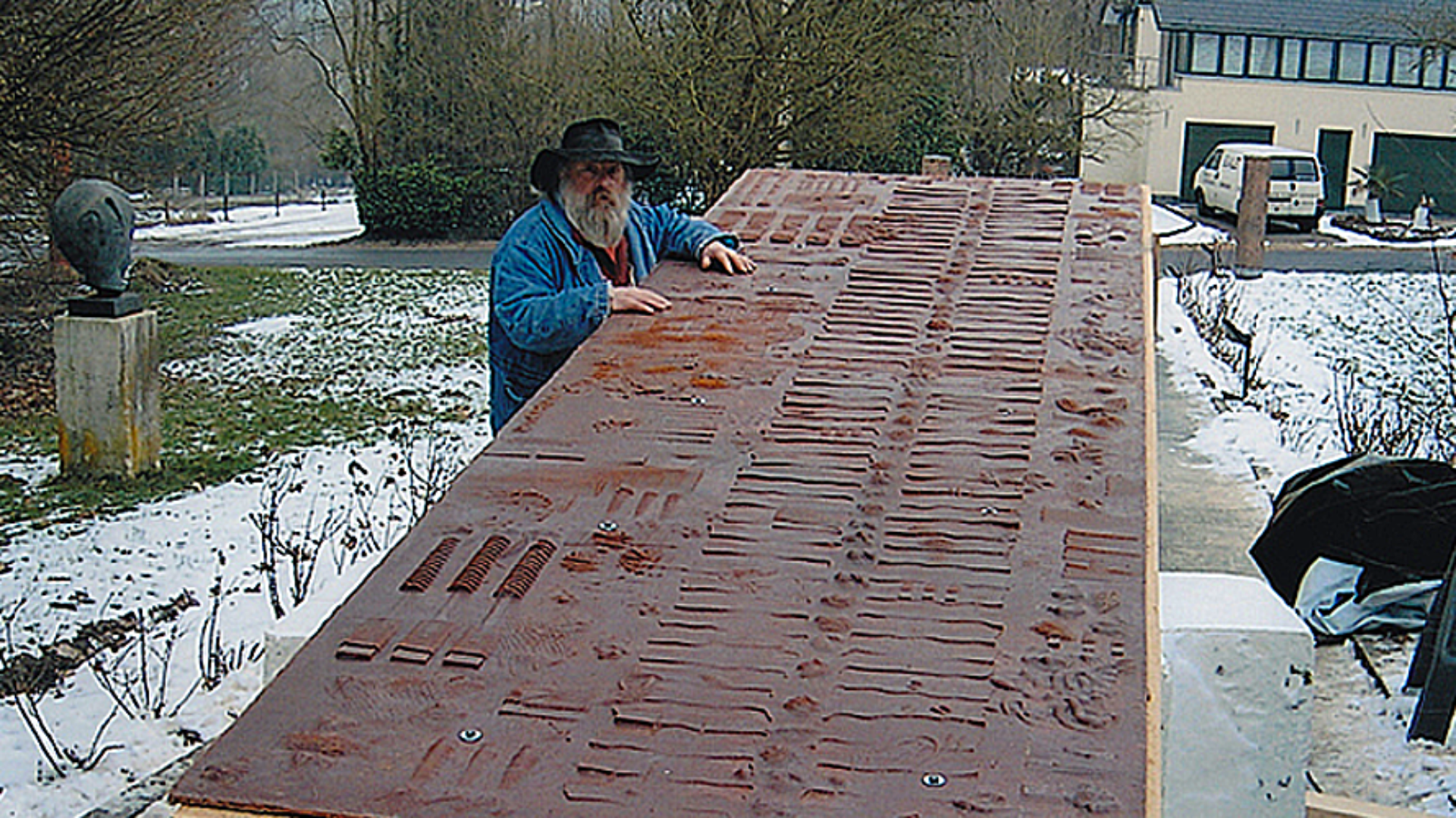 « For Martin Ankh, his sculptures are children to whom he has genuinely given life. If one of them is accidentally broken, it’s a tragedy. It’s a piece of himself that has been removed.

This man, built like a rock and who some compare to Rodin, with his impressive stature, is full of emotion. In 1968, he created Les Chaises (The Chairs), a lovely, fully-balanced composition.

Difficult however to get him to sit on a chair and talk. This solitary man who breathes energy doesn’t like to talk about his profession, neither as a teacher nor as a sculptor, and when he is asked a question, fragments of his answer have to be extracted from him. He leaves you guessing.

What torment there is in his hands… Organs of touching and holding, we see them coming and going, intervening, changing, printing, engraving, caressing and polishing those materials for which Martin lives.  Radiation (Radiance), Démesure (Outrageousness), Oppression, Impasse… those bronzes dating from 1973 to ‘74 evoke the internal questions that the artist asks himself: torment, struggle, sometimes downfall.

Reflection of a personality, testimony of tranquillity and anguish alike.

The impressive, almost destabilising presence of his hands that emerge as cries, and in Martin Ankh become the expression of plural faces, portraits of others or of himself.

Unexpected, irregular, eccentric… the flight of those hands that emerge from everywhere is tinged with the baroque. Fragmentation and destabilisation.

The first duality can be found in the power struggle between the hands and the material, which, however, they shape.  Sign perhaps of confrontation.  Struggle with the stone or the bronze, just as life itself is a fight.

When casting an eye over a production that today encompasses more than thirty years of creation, we can see rivalries.

Philosopher, this Martin who opposes soul, mind and conscience to the body that is material.

Ambivalence of the sculpture that corresponds to the duality of the human body.

Duality of the form. Confrontation of those almost baroque explosions, delirious to the extent of paroxysm.  Appeasement of the Black Sun, tranquillity regained, evocation of perfection in the purity of the circle, in the polishing of smooth, round marble, which invites a caress.

Black Sun that engenders night and cold, sole material emanation: warmth of bronze that delicately gnaws the contours, nibbles the cold and the hardness without the appeal of marble.
Duality of materials, exploited to the very limits of their possibilities.

Encounter between the world of the hermetic and the opening of the sign. Humanisation of material.  The sign is soon going to apprehend the entire surface, trace of man, of life and of memory. Memory of the surface.  Transcription of a past and the power of the symbols.

Particular iconography of a distant heritage whose alphabet Martin knows and expresses, on the tips of his fingers.

Synthesis of the history of a region, combat with nature, with life, with material and with other people.

Density of signs, of hands that endlessly return, of surfaces sometimes covered to excess.

Tributes to the existing. Strength of roots.

Duality of the materials, which endlessly confront each other. Pummelled, torn, cut up, printed, finally dominated, they know how to communicate.

The duality in Martin never ceases. How can this man’s colossal hands create fragile, delicate, fine, subtle, penetrating forms, in the same way as they get a pillar to burst forth from the ground that rebels and which he takes pleasure in mastering?

Nothing in Martin, man of contrasts, astonishes us. He engraves, incises and traces in the same manner on a height of twenty metres as on one square centimetre, on stone or bronze, or on gold or silver.

The one could be or become the other. The fragile joins the monumental.

And the material becomes life, imparted to the body of which the soul is the sculptor. »